“Monsters are real, and ghosts are real too. They live inside us, and sometimes, they win.” – Stephen King 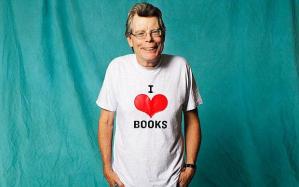 There are your typical horror/thriller authors, and then there is Stephen King. From a demented fangirl who forces her favorite author to write a sequel, to a shape-shifting clown who feeds on small children’s fear, Stephen King has a knack for scaring his audiences. He also engages people with coming of age stories, time travel and the wrongfully accused. King has taken audiences into the past, present, other dimensions and apocalyptic futures. His works are intriguing, engaging, at times terrifying, yet many of his story’s messages are universal.

With novels, such as The Stand, The Green Mile, The Shining, Salem’s Lot, and It, King has become one of the most well-known authors of gothic horror/thrillers. King’s writing spans over 40 years and 60 books, making him one of the world’s most prolific and successful authors; the “Grandmaster of Horror” has also had nearly 100 of his works

“Life is like a wheel. Sooner or later, it will always come around to where you started again.” – Stephen King

Stephen King was born September 21, 1947 in Portland, Maine, and during his early years, he also lived in Connecticut and Indiana. Stephen and his older brother, David, were raised by mother, Nellie (The Author, para.1, stephenking.com), and when Stephen was eleven, the family settled in Durham, Maine, so Nellie could care for her elderly parents. This would prove a formative time (and place) for King and for his future writings. When his grandparents passed away, Nellie found work in Pineland Hospital, a nearby residential facility for the mentally challenged (Stephen King Biography, IMDB). For anyone who has read the works of King, or seen films and TV shows based on his works, it is obvious that Maine serves as a backdrop for many of his stories.

Upon graduation from high school, King went on to attend the University of Maine at

Orono, and there he engaged his passion for writing. He wrote a weekly column for the school newspaper, The Maine Campus, and was also a member of the Student Senate (The Author, para. 2, stephenking.com). While there, he also sold his first short story The Glass Floor to Startling Mystery Stories. He was active in student politics, and was a strong advocate for the anti-war movement on his college’s campus. (The Author, para. 2, stephenking.com). He was drafted for the Vietnam War, but he failed his draft-board examination on grounds of high blood pressure, flat feet, punctured eardrums, and limited vision. He would eventually reveal that he suffers from macular degeneration, an incurable condition that will most likely lead to blindness (Stephen King Biography, IMDB). 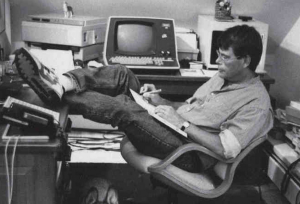 He graduated from college and earned a Bachelor of Arts in English in 1970, and married his college sweetheart, Tabitha Spruce In 1971 (they are still married today). He started writing more short stories during this time, to provide additional income to his family (while also searching for a stable job).  Many of these works were sold throughout the early years of their marriage, and were later gathered into his best-selling Night Shift collection.

In the fall of 1971, he got a job teaching public high school at Hampden Academy (The Author, para. 5, stephenking.com), and he spent his free time perfecting his writing craft by taking his storytelling to novel formats. His first novel, Carrie, a supernatural story about an abused outsider discovering her true gifts, was accepted for publication in the spring of 1973 (The Author, para. 5, stephenking.com). That same year, King’s editor, Bill Thompson, told him that “a major paperback sale would provide him with the means to leave teaching and write full-time”(The Author, stephenking.com). Thompson was right, and King’s world soon changed. Carrie hit the shelves in 1974, and by 2017, King had produced works that collectively sold “an estimated 350 million books” (Rollingstone.com, Stephen King). 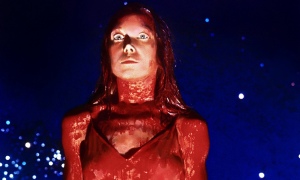 Carrie launched Kings career as a unique and terrifying writer, and In an interview with Rolling Stone, King explained why most of his books are horror/supernatural in nature and why he was drawn to that particular genre. “It’s built in. That’s all. The first movie I ever saw was a horror movie. It was Bambi. When that little deer gets caught in a forest fire, I was terrified, but I was also exhilarated. I can’t explain it…“ (Rollingstone.com, Stephen King para. 6). King also explores themes such as guilt, as seen in 1922 (2017), friendship like the ones we see in Stand by Me (1986) and facing one’s fears, IT (1990, 2017). But, for some reason the stories exploring the limits of fear tend to draw audiences in the most.

“And as a writer, one of the things that I’ve always been interested in doing, is actually invading your comfort space. Because that’s what we’re supposed to do. Get under your skin, and make you react.” – Stephen King

The next few years proved to be filled with ideas and opportunity for King. In the summer of 1973, King wrote his next novel ‘Salem’s Lot (originally titled The Second Coming, and then Jerusalem’s Lot), and in 1974, the Kings moved to Boulder, Colorado. They lived there for less than a year, but during this time King wrote The Shining (The Author, para. 7, stephenking.com). The summer of 1975, the Kings bought a home back in Maine, and at that house, King finished writing The Stand, and wrote The Dead Zone (The Author, para. 7, stephenking.com). While many of these stories were indeed filled with terror, fear and the supernatural, several also offered a glimmer of hope and heroes along the journey. “It’s better to be good than evil,” King said, “But one achieves goodness at a terrific cost” (Stephen King Quotes, brainyquote.com).

“If you want to be a good writer, you must do two things above all others: read a lot and write a lot.” – Stephen King

King’s story ideas poured out during the next decade as if powered through a firehose, 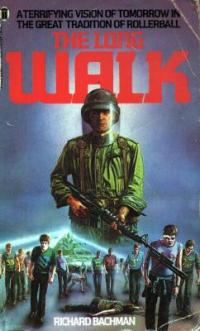 and he decided to do something a little different. He wrote several novels under the pseudonym Richard Bachman, because he believed that the public wouldn’t buy more than one book from the same author in a year. Four of his early novels- Rage (1977), The Long Walk (1979), Roadwork (1981) and The Running Man (1982) -were published under the Bachman name. He came up with the moniker after seeing a novel by Richard Stark on his desk, while also listening to the song, “You Ain’t Seen Nothing Yet”, by Bachman Turner Overdrive (Stephen King, Biography.com). He would go on to write three more novels under that pseudonym – Thinner (1984), The Regulators (1996), and Blaze (2007).

The Kings would move several more times including a stint in London, England before settling in Bangor, Maine. After the success of his first novels, and the pressures of writing best-sellers,  Stephen King would have bouts with declining health due to drug and alcohol abuse, until his wife staged an intervention. Her message to him was: “Get help or get out. We love you, but we don’t want to witness your suicide.” (Stephen King, IMDB). He listened, and knew he had to change; he received the help he needed and became sober. Since then, King has continued to have novels published, and

films adapted from his works. Some of these include Cujo (1983), Firestarter (1984), IT (1990, and a remake in 2017), and The Shining (1980). King wrote novels at a breakneck speed throughout the 80’s and 90’s, and he continues be involved in innovative works and provocative projects. He has worked directly with television, writing for series like Kingdom Hospital and Under the Dome (based off his 2009 novel). Inspired by his works, Hulu will also release a psychological horror series called Castle Rock in 2018, which will intertwine characters and themes from his works and take place in the fictional town of Castle Rock, Maine.

Awards, The O. Henry Award, and the Lifetime Achievement honor from the World Fantasy Awards (Awards, Stephenking.com). As of 2017, King had forty-three novels under his belt, along with eight collections of short stories, eleven screenplays, two books on the craft of writing, plus he is a co-author of Faithful which is a day-by-day account of the Red Sox’s MLB championship season in 2004. (Paris Review, Stephen King, The Art of Fiction, para. 4).

King shows no signs of slowing down, and with nearly 100 of his works adapted to film or TV already, his status as a writer (and film) legend looks to continue to expand. Stephen and Tabitha also have sons (Joe and Owen) who are becoming successful writers as well

Every artist (whether filmmaker or writer) has trademarks that flow through their works; Stephen King is no exception. Many of his works have significant similarities, whether it be the setting or character types. One of his major trademarks is the use of Maine as the physical setting. Many of the male characters in his novels have occupations as writers, including Paul Sheldon from Misery, Mike Noonan from Bag of Bones, and Bill Denbrough from IT. He often uses horror and fantasy themes, and even supernatural elements. Many children/youth characters are often killed in his novels, including Tad from Cujo, Gage from Pet Semetary, Ray from The Body, and Georgie from IT. Many of his characters also experience hallucinations, such as Wilfred James from 1922 or Jessie Burlingame from Gerald’s Game. Readers will also discover that characters face inner demons as a result of self-inflicted mistakes or choices. Murder, imprisonment (physical or mental), revenge, the evil heart, and punishment for actions (or inactions) live throughout the themes, morals and messages of the King landscapes.

Stephen King has a unique way of mentioning his previous novels (or characters) in his works as a way of dropping Easter eggs for his audience. His also depicts small-town life filled with dark secrets and transports readers/viewers into the story by asking … “what if?”

King can paint pictures that fuel imaginations; he can terrify or inspire you; he can feed your nightmares or your dreams. Some of his stories strike amazing similarities (Shawshank Redemption and the Green Mile), while others are like different sides of the same coin (Stand By Me and IT). Having written over five dozen novels, he continues to possess a creativity that filmmakers and television producers love to explore (Revival, The Mist, Doctor Sleep, The Long Walk). He has been compared to a cross between William Shakespeare and Edgar Allen Poe, and his ability to continually to dispense new works (almost in the blink of an eye) has also brought him into comparisons of filmmaker Woody Allen (who churns out new works annually). 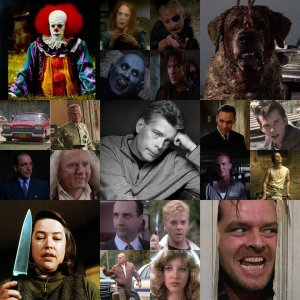 King transcribes his own fears and create masterpieces that withstand the element of time. It’s something he continues to love, and he constantly reminds aspiring writers to take a chance, and find the adventure within their craft. “Do it for joy and you can do it forever. Let’s get one thing clear right now, shall we? There is no Idea Dump, no Story Central, no Island of the Buried Bestsellers; good story ideas seem to come quite literally from nowhere, sailing at you right out of the empty sky: two previously unrelated ideas come together and make something new under the sun. Your job isn’t to find these ideas but to recognize them when they show up.