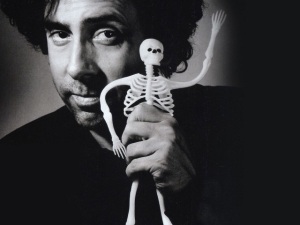 Born in the shadows of the Hollywood sign, and in the backyard of Walt Disney Studios, filmmaker Tim Burton’s gothic storytelling and darkly creative approach to set design, make up, character creation, and wardrobe is anything but a filmmaking style born in the heart of Cinderella and Snow White country.

Raised in Burbank, California, Tim Burton was a shy outsider who was a bit different than most of the kids his age. He was socially awkward, and not particularly an academic all-American. His loves were Dr. Seuss books, monster movies, films of Roger Corman, horror films from Great Britain’s Hammer Studios, and the brilliant animation work of Ray Harryhausen. But what Burton lacked in scholastic prowess, he more than made up in his artistic brilliance. “There was one moment, and it happened in school,” said Burton. “I had a big final exam–we were supposed to write a 20-page report on this book about Houdini [Harry Houdini]. I probably would have loved reading it, but I didn’t, so I just decided to make a little super-8 movie based on it. I tied myself to the railroad tracks and all that. I mean, this is kid stuff, but it impressed the teacher, and I got an A. And that was maybe my first turning point, when I said, ‘Yeah, I wouldn’t mind being a filmmaker.’” 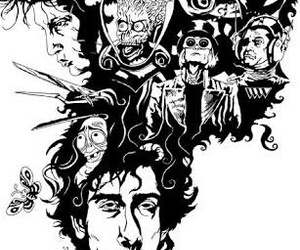 His love of creative art and drawing ultimately landed him an opportunity to study animation at the California Institute of Art where he gained favor and was asked to apprentice at Walt Disney Studios in the animation division. The Disney animation landscape and the structured form of mass animation was a far cry from the stylistic preference of Burton. He eventually found himself bored and uninterested in the work, but Disney found a way for Burton to stretch his imagination and talent. He was brought in to design concept art for future projects, but many of his characters and designs were considered too disturbing for children and family audiences. Nonetheless, Disney still knew that they had something special in Burton and allowed him to pursue some personal projects. “People (tend to) ignore the strange and unusual,” noted Burton. “I, myself, am strange and unusual.”

Two stop motion animation projects in the early 1980s were rich with dark and ghoulish subject matters that would serve as foundational trademarks. “Vincent” (1982) was a six-minute award-winning animated short about a boy dreaming of living within a horror movie while inhabiting the body of horror legend Vincent Price (voiced by Price himself), and “Frankenweenie” (1984), was a unique reinterpretation of the Frankenstein story. “I’ve always liked monster movies,” said Burton, “I’ve always been fascinated by growing up in a culture where death was looked upon as a dark subject and living so close to Mexico where you see the Day of the Dead with the skeletons and it’s all humor and music and dancing and a celebration of life in a way. That always felt more of a positive approach to things. I think I always responded to that more than this dark, unspoken cloud in the environment I grew up in.”

While Disney began to find themselves becoming more and more disconnected from Burton’s approach to subject matter for projects, best selling horror writer Stephen King was becoming a major fan. It was actually King who has been credited with opening the door to Burton’s launch into feature films. Warner Brothers Studios was looking for a creative director to bring comedian Paul Reuben’s alter ego Pee Wee Herman (1985) to the big screen, and King recommended Burton for the task. Burton was hired to helm the project that blended fantasy with visual magic and a simple road trip story of an odd man searching for a lost bike. The film became a surprise box office smash and launched Burton’s career.

Three years later he followed with the chaotic ghost comedy “Beetlejuice” (1988) where he met Michael Keaton (Oscar nominated actor for Birdman – 2014). The two connected again when Burton was given full creative control of a project Warner Brothers had been trying to bring to the screen for over ten years, “Batman” (1989). Burton’s version of “Batman” (with Michael Keaton in the lead role) offered a dark tale of revenge, corruption, and moral decay, and it became the first film to sell $100 million in ticket sales in the first ten days. But Burton’s version also offered a tongue in cheek, satirical approach to comic relief, casting Oscar winner Jack Nicholson as the villain, The Joker. The film became a box office sensation, and has been credited with relaunching a dying superhero film genre. Many critics say that without Burton’s vision in 1989 to bring the man vs. self conflict of Batman to the big screen, Christopher Nolan’s “Dark Knight Trilogy” may have never happened a decade and a half later.

In 1990 Burton brought his own feature-length take on a Frankenstein-esque story to film and started a longtime collaboration with Johnny Depp in “Edward Scissorhands.” Burton had complete creative control serving as writer, director, and producer. The story followed a misunderstood outsider who didn’t quite fit into society. Although he tried, he became ridiculed, and eventually feared for his differences. This story of love and intolerance was a true fable reflecting perspectives of society that are just as relevant today. Critics and audiences alike were drawn to this film, and Burton began to be taken more seriously as a filmmaker who could offer artful stories as well as blockbuster hits.

“I grew up watching monster movies and horror movies,” said Burton, “which I felt were like fairy tales, and I think this always spoke to me. Something about that is symbolism – the beauty and the magic which helps me work with film and start making modern fairy tales.”

Burton returned to Gotham City and the world of Batman in 1992 (“Batman Returns”), but this much darker (and adult) version of the caped crusaders adventures caused parents to complain that Burton’s film was far from the kid-friendly superhero jaunt they were expecting. But Burton never claimed to make this film for children, at it’s depth Batman’s story is far from a kid-friendly environment. The film was an artistic masterpiece, yet Warner Brothers caved in to the parental reaction, and asked Burton to step aside as director for the next installment, although he continued on as producer. “It was a weird reaction to ‘Batman Returns,’ because half the people thought it was lighter than the first one, and half the people thought it was darker,” said Burton. “I think the studio just thought it was too weird – they wanted to go with something more child- or family-friendly. In other words, they didn’t want me to do another one.” When Burton left the franchise, some felt the heart of Batman left as well. And although the Batman story continued for the next few years, it lost its focus and eventually the appeal for audiences, until Chris Nolan resurrected the Dark Knight in “Batman Begins” (2005). 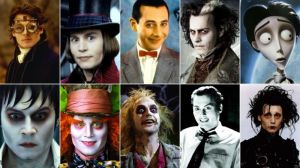 His long-running work with Johnny Depp brought the film world unique characters like  – a wacky film producer (“Ed Wood” – 1994), a paranormal investigator (“The Legend of Sleepy Hollow” – 1999), a serial-killing barber (“Sweeny Todd: The Demon Barber of Fleet Street” – 2007), a resurrected vampire (“Dark Shadows” – 2012) and a mentally disturbed hatter (“Alice in Wonderland – 2010, “Alice through the Looking Glass”  – 2016). Each of these films brought the Tim Burton trademark and surreal visuals to life while also exploring the themes of inner-humanity captured by society’s expectations.

In 2016, Burton directed the YA novel adaptation “Miss Peregrine’s Home for Peculiar Children.”

Burton never abandoned his love of animation, and in the past two decades has helmed “The Nightmare Before Christmas” (1993), “James and the Giant Peach” (1996) and the Oscar-winner “The Corpse Bride” (2005). Which goes to prove that once an artist, always an artist  – Burton’s first love was art, his first work in film was a result of his artistic fortitude – today he continues that craft. Nearly 1,000 of his originals have found their way to museums around the world. And in 2019, audiences will discover Burton’s take on a live-action version of the Disney classic “Dumbo.”

When once asked about his love for things “dark, creepy, and twisted” Burton responded, “One person’s craziness is another person’s reality. Movies are like an expensive form of therapy for me.”

While Burton may have always been considered an outsider to many, he has advice to those seeking solitude or personal space of their own. “If you want people to leave you alone then appearing to be crazy is a good thing,” noted Burton. “If you’re walking down the street talking to yourself people tend to give you a wide berth! But I’ve always been blessed with being easily ignored or avoided. I think maybe it’s because people think I look a little crazy.”