The Shape of Water – Favorite all-star film of the year. Writer, director, producer

Guillermo del Toro brings to the screen a film that blends genres and celebrates the best of the golden age of Hollywood. The Shape of Water combines the classic horror elements of Universal monster films, with a nod to the traditional musical, a taste of Cold War spy pics, and a unique take on beauty and the beast  – all captured within a true fish out of water story.

The talented acting ensemble includes Sally Hawkins (as a mute female janitor), Doug Jones (as an amphibian creature), Michael Shannon, Richard Jenkins, and Oscar winner Octavia Spencer. Hawkins character, Elisa, is the catalyst driving this narrative into one of the most distinctive and compelling love stories I’ve seen on film in quite a while.

music selections (and ambient TV broadcasts) to serve as backdrops to the time, setting and mood. The cinematography, production elements, sound design, and lighting are perfect for this artistically brilliant film.

This creative masterpiece captivated me from the open scene until the final frame and earned an “A+ rating.” Guillermo del Toro’s movie magic was purely enchanting here, and as I look back at the films of 2017, this will be the one I’ll remember the most. 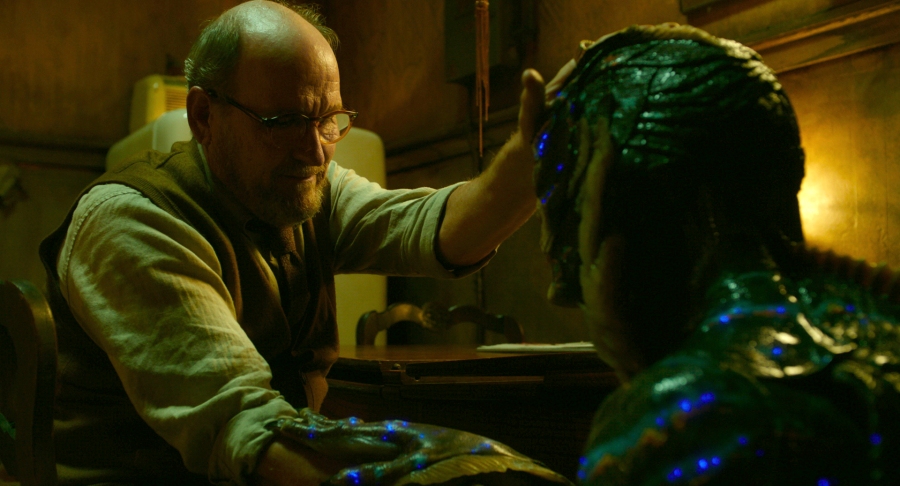