In “The Martian” Ridley Scott directs this great Matt Damon vehicle that combines “Apollo 13,” “Cast Away,” and “MacGyver.” When astronaut Mark Watney (Damon) 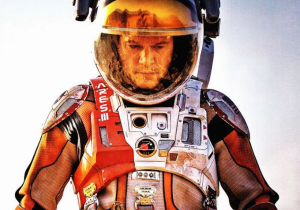 is left for dead on Mars, he must discover how to survive on his own in a hostile environment where the smallest of mistakes can cost him his life.

It is the story of perseverance, human will, and ingenuity. As rich as the story is here, the set design, sound mix, casting, and visual design make this a complete film. This film transcends science fiction, and is much more drama than science fiction, yet should appeal to audiences of both genres. Damon’s character provides elements of comic relief in the midst of utter chaos. Audiences witness a character at war with nature, the unknown and himself in a film that earns a solid “A” on the Cinemascene scorecard.

The Martian is rated PG-13 for language & disturbing scenes, and brief nudity. It is distributed by 20th Century Fox.