Johnny Depp shines in a role a bit different from what we’ve seen in the past. No wacky Mad Hatter, insane pirate, demon barber, out of place vampire, or Frankensteinian hedge-clipper here. This time, Depp stars as true-life Boston mobster, James ‘Whitey’ Bulger.

I’ve seen so many mob films over the years, that it is difficult not to compare on-screen characters in films of the past (biopics or originals). But in Black Mass, Depp brings a character to life who is familiar, yet original at the same time. In many US mob films, you will find a typical rise and fall of a character and a twisted search for their interpretation of the American dream. Most of the time tragedy befalls anyone standing in the way, with the kingpin mobster finally meeting the grim reaper as a result of the battle with self. These are the very stories that would make Shakespeare proud.

In this film, Depp’s character is truly focused on power for the sake of power much like Heath Ledger’s Joker was serving up violence and mayhem just because he could. This mob picture is filled with FBI double-crosses, unholy alliances, mob wars, & family dysfunction. I did find the story to be less compelling than it should’ve been (or than I’d hoped for), and it felt like it was trying to copy the Scorsese formula, and that was my biggest 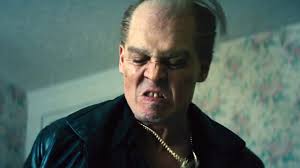 problem, it was an average copy at best. The absolute best part of this true-crime story was the casting. Depp continues to show he’s able to be versatile and do what Depp wants to do within any role. Johnny Depp is not just a movie star, he’s a top rate actor as well. And because of him, Black Mass gets a B- instead of a C+. I’ve seen plenty of mob movies over the years, and as a whole, this one will be forgettable, even if Depp’s performance won’t.

If you’re interested in some better gangster flicks, I’d suggest checking out “Goodfellas,” “The Godfather,” “The Departed,” “Scarface,” or “Reservoir Dogs.”