The Life of Benjamin Button … a World Turned Upside Down

There are certain films in one’s life that could be classified as a true movie-going experience. Such movies will cause an audience member to leave the theatre with a distinct lasting impression (good or bad) that will distract minds and thoughts from everything else for quite a while. It is the type of film that you can’t escape…you can’t stop talking about. Such is the case for the new film, “The Curious Case of Benjamin Button.”

Starring Brad Pitt and Cate Blanchette, this film, Based on the 1922 short story from F. Scott Fitzgerald, follows the life of one of the most unique characters put onto film since Forrest Gump (1994). Benjamin Button was born with an unusual disorder that causes him to age in reverse. Although Button is different physically from everyone around him, and must face challenges and endure hardships because of it, he has an unquenchable thirst for life, adventure, and love that transcends any barrier thrown in his way.

During this film the audience will travel through a period of time covering the end of World War I (1918) to the landfall of Hurricane Katrina (2005). As we watch the years progress, we are witness to a life (and life’s experiences) unlike many of us have ever seen before on film. In a Pinocchio-like characterization, Button yearns to be normal, to be just like everyone else. But in contrast, it is because of his differences that audiences hunger to be just like him, to see the world through his eyes. His approach to friendship, family, career, and love are done so with a rare and pure passion. He is a character (in many ways) we all wish to be. This is a magical film about love, sacrifice, life and how the choices we make are the decisions that can ultimately define who we are and who we wish to become.

It has been several weeks since I first saw “The Curious Case of Benjamin Button,” yet I still can’t get it out of my mind. There are very few perfect films in the world, but this one comes very close. That being said, this is not a film for everyone. With the MPAA rating of PG-13, “Benjamin Button” is a dramatic love story (with fantasy and adventure) featuring adult themes and at times emotional moments that may even soften the hardest of hearts. Already honored with a host of award nominations (including eight from the Broadcast Films Critics and five Golden Globes) this film will be remembered as one of the year’s best. Not only has “Benjamin Button” earned a spot on my best of the year list, it is also now one of my all-time favorites.

At a recent private preview screening of this film in Shelby, N.C., several Gardner-Webb University students studying film critique had the opportunity to share their thoughts with the film’s director (through film representatives in Shelby). Here are some of their observations about “The Curious Case of Benjamin Button.”

“The script is fascinating and moving. It is not hard to see why. The screenplay was written by Eric Roth, the Academy Award winning writer of Forrest Gump. Under the direction of David Fincher (Panic Room, Fight Club, Zodiac, Se7en), the story truly shines. The film is one of the best I have seen in a long time.”

“Tender and touching, this film explores the plight of old age and death in a unique fashion, also teaching that true love is not about the outside appearance. Only very rarely does one discover a film that is so poignant, so touching on every emotional level, that it can appeal to almost everyone, no matter where they are in life.” 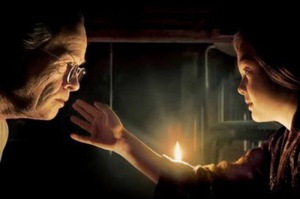 “The Characters in this movie were incredible. They made the story what it is. Brad Pitt gave a flawless performance as Benjamin Button and made each scene (at each age) his own. He and Cate Blanchette had an on-screen chemistry that was undeniable and fit the movie an authentic way.”

“The film very effectively uses subtle humor to try and engage the viewer. Because of this, I think a very broad audience will enjoy the

film. One could say that ‘Benjamin Button’ is both an exploration of the human soul, and a visual ‘think-piece’ that uses film to expose and shed light on some controversial issues in an effective manner.”

“The cinematography is stunning and the way the film is shot truly results in an emotional connection with the characters and their story. By the end of the film you have no idea it has been well over two and half hours since you sat in your seat. The film teaches us that everyone is a little different in his or her own way while also exploring why no one should fear death. If you want something memorable to do this Christmas season, go see ‘The Curious Case of Benjamin Button.’ It will be the best seven bucks you’ve spent at a movie in a long time.”